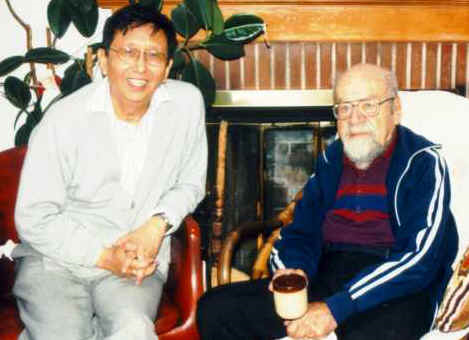 Joe Fabry was a storyteller at heart. In his youthful years, he gave up a career in law in order to do creative writing. To the surprise of his parents, he was able to make a living by selling his stories. His sharp mind and his ability to write well remained with him until his last days.

Not too long ago, someone in the logotherapy group said to me: “Viktor Frankl was a prophet, but Joe Fabry was only a scribe.” But Joe was much more than a scribe. He was a visionary storyteller with a prophetic voice; he was a dreamer and a builder—which would qualify him as a “minor” prophet.

My association with Joe over the past few years has been most enjoyable and memorable. While on my sabbatical leave at the University of British Columbia in 1994-95, I articulated for the first time my integrative model of meaning-centered counseling. Logotherapy is at the centre of this model, but it also incorporates cognitive-behavioural principles. Therefore, it may be called spiritual-existential-cognitive-behavioral therapy.

I presented my paper at a colloquium of the Counselling Psychology Department of UBC in March 1995. My presentation was well received by both professors and graduate students. But I was still not too sure whether I was on the right track with respect to logotherapy. So I decided to send a copy to Joe Fabry for his comments. I had read most of his writings, and thought that, next to Frankl, he was probably most qualified to evaluate my extension of logotherapy.

I was delighted by his speedy and extremely positive response. He said, “You have developed what I had hoped for a long time—the extension of Dr. Frankl’s ideas into a wider practical methods of application, combining them with other methods into a comprehensive model.”1 He wanted to publish my long paper in instalments. A few weeks later, I received a letter from Dr. Hutzell stating that “Joe Fabry has a copy of your paper and he speaks extremely highly of it.”2 Dr. Hutzell also asked me to submit the paper to The International Forum for Logotherapy in instalments.

After this initial exchange of correspondence, each year Joe sent me the Fabry Gazette with a personal letter. “How are you getting along with the articles for the Forum?” he would ask. And he would gently remind me of my promise to send him articles on meaning-centered counseling. His letters always made me feel guilty for my tardiness. At long last, I sent him the first instalment.3 In a letter dated February 11, 1997, he wrote:

I was delighted to get your article and I am sending it on to Dr. Hutzell for processing into the Spring Forum. I welcome your developing logotherapy into “neologotherapy.” I am not sure how Frankl will feel about it, but I think you have kept his basic ideas and expanded them.4

The publication of this first instalment resulted in numerous positive responses from all over the world, including those who were involved with logotherapy from the very beginning. Joe was delighted that his confidence in my neologotherapy was validated. He continued to press me for additional instalments, but I did not send him another article until a year later.5

I deeply regret that Joe did not live to see the remaining instalments. I have been busy building up a new graduate program in counselling and I blame myself for allowing many other projects to delay my neologotherapy project. However, I will honour my commitment to Joe to complete this series of articles without further delay.

Joe believed that Viktor Frankl’s story needs to be retold to new generations in a new language without changing the basic concepts. Joe’s willingness to embrace and promote my extension of Dr. Frankl’s logotherapy was a breath of fresh air within the logotherapy circle.

During my last visit with Joe and Judith in August 1998, we took a long walk and then returned to his house for more talk on logotherapy. He was delighted with the publication of The Human Quest for Meaning,5 to which he had contributed a chapter. He suggested that Dr. Robert Leslie write a book review for the Forum.

Throughout our conversation, he only reminisced briefly about the heady days of launching logotherapy in the US; his focus was on the future. He was especially excited about my proposal to organise an international conference on Searching for Meaning in the New Millennium in Vancouver, July 13-16, 2000.6 He was most pleased to learn that this conference was inspired by his earlier idea of organizing a Festival of Meaning. He promised that he would come to the Vancouver conference if his health allowed. After my visit, he even took the trouble to write to Dr. Robert Barnes urging him to co-operate with me:

An international Congress in Vancouver would attract much attention, and he has connections beyond our own, in fact, beyond logotherapy, to related meaning-oriented movements. . . . I share Dr. Wong’s concern about the “fragmentation” in the logotherapy movement, and don’t want to contribute to it. But Dr. Wong is a co-fighter, friend, and supporter, and sees the Vancouver Congress as a boost to the movement.7

He was pleased with the prospect of introducing Dr. Frankl’s ideas to a new generation at the Vancouver conference. He also expressed the opinion that the International Congress on Logotherapy be held in different parts of the world. His ecumenical, progressive spirit stands in stark contrast to the fundamentalist “bunker” mentality of many logotherapists I have met.

Those who cling to the past and resist change will be relegated to the dustbin of history. But those who dare to pursue a new vision will make history. Indeed Joe has made history in establishing the Viktor Frankl Institute of Logotherapy and The International Forum for Logotherapy. Even in his advanced age, he remained a courageous, prophetic visionary and storyteller, exploring new ways of expanding Dr. Frankl’s ideas.

From all my interactions with him, I have the distinct impression that he would want to see logotherapy move forward rather than backward; and that he would want to recruit more visionary storytellers like himself to advance logotherapy into the new millennium. I sincerely hope that Joe’s generous, visionary spirit will continue to live in those entrusted with the responsibility of the Viktor Frankl Institute of Logotherapy.