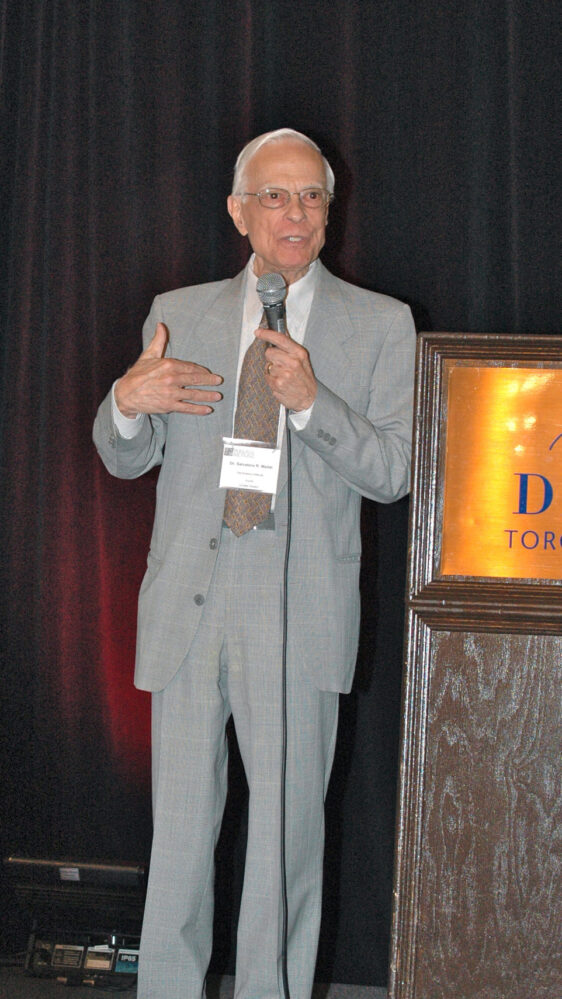 On Sunday, November 29th, 2020 Dr. Salvatore Ignacio (aka Richard) Maddi, loving husband of Deborah Khoshaba-Maddi and father of Karen and Christopher Maddi, passed away of cancer at the age of 87.

Salvatore was born in Manhattan New York on January 27th, 1933 to Petro and Jennie Maddi. Salvatore’s father had immigrated from Sicily to New York early in the last century to seek his fortune, and later wrote back to the priest in his hometown to send him a suitable wife. His mother, a well-educated devout Catholic who came from a family who had fallen into hard times, accepted the invitation to move to New York and married his father. Petro worked in produce at a grocery store and Jennie was a seamstress in the garment industry, making men’s suits. Sal was the youngest of their four children and the only boy. His sisters, Rosina, Mary and Grace are now all deceased. Sal grew up bilingual and they spoke Italian at home, although he and his sisters learned English in school.

Sal was raised in an immigrant neighborhood of New York City where he attended public schools. During grade and high school, he would encounter neighborhood bullies who picked on him. He recalled many times his mother’s loving words of support. “Couraggio my son,” she would say. Sal’s mother’s encouraged Sal from the start not to shrink back from life problems. He credited her with teaching her children the value of decency, a good education and contributing positively to society.

In his youth and early teens, Sal was an avid boy scout and developed a love of the outdoors, despite his urban upbringing. He also loved art and dabbled in creative pursuits, although he always believed his sisters were more talented than he was. One of Sal’s first jobs was as a messenger in New York City. He carried out his job by riding a bicycle from one destination to the next. Although anxious at first to travel to locations unfamiliar to him, he remembered his mother Jennie’s message of courage. Despite his modest means, his parents’ courage and determination to better themselves showed Sal that life beyond the limitations of his childhood was possible for him. Little did he know back then that this loving and encouraging beginning would evolve into Sal helping people to navigate tough times and circumstances to their personal and professional success.

Sal showed academic potential from a young age. Teachers took him under their wing and encouraged him early on to get a college education. He attended the prestigious Stuyvesant high school and went on to Brooklyn College. Although he initially considered architecture, he ultimately earned a Master’s degree in psychology with Honors from Brooklyn College in 1956. He went on to Harvard University where he earned a Ph.D. in Clinical Psychology with a Minor in Personality and Social Psychology. He was certified as a Clinical Psychologist in the States of Illinois and later California.

In February1954 Salvatore married Dorothy-Anne Linder, his college sweetheart. Their first child Karen was born in New York City, but shortly thereafter, they started a new life in Cambridge Massachusetts when Sal attended Harvard. Ultimately, Sal and Dorothy ended up living in Chicago, Illinois, as Sal became a Professor of Psychology at the University of Chicago. Later, their son Christopher was born.

Sal loved being a professor, loved university life, and made his career in academia. His students not only gave him high ratings for his teaching, but also commented that he was a snappy dresser because he preferred tighter European cut suits to the prevailing baggy jackets and typical casual attire of Hyde Park academicians. He was a prolific researcher and talented writer who authored many articles and books. He was particularly interested in what makes a person be resilient despite experiencing stressful circumstances, a personality characteristic he called Hardiness, an early concept in the resilience and positive psychology movement today. Later in his career he worked on ways to enhance people’s hardiness, which was picked up and practiced in numerous countries. He earned many accolades in his career including two Lifetime Achievement awards, and numerous grants and other awards.

Sal was also a social activist, championing the rights of others through participation in public

demonstrations as a young man, but also by how he led his life overall, treating others as an equal no matter who they were or where they came from. He had a knack for making people feel valuable, capable and good about themselves. He was curious about the world, loved to travel, and escorted his family on many trips, including one where he took his mother back to the town of her childhood in Sicily, a place she had not seen since she was a teenager. He was also an avid gardener and loved to play tennis.

Life brought changes and his first marriage did not last. Once their children were grown, he and Dorothy ended their marriage. Sal was recruited to be the chair of the department of Social Ecology at UC Irvine in California. He moved to Laguna Beach, a town he was drawn to because it was beside the ocean and was filled with artists and what he affectionately called “lagunatics” which seemed to mean that he found a wide range of open minded creative people who made him feel at home. Sal fell in love with and married Deborah Khoshaba, a psychologist with whom he shared many interests, not the least of which was his research. They spent over 30 years together in southern California, working side by side as professionals, in addition to sharing all the other parts of their loving relationship. To the very end, they would delight in learning how much their individual interests and tastes were closely matched. Together they also shared a love of Maltese dogs and he was the proud “daddy” of several who in turn

Sal did not step down from his full professorship at UCI until he was in his eighties. He saw no reason to stop working when he was doing what he loved. Finally, there came the time when he decided he needed more time to relax and he retired, first in Laguna Beach and in the last several years, in Las Vegas, NV where he and Debbie moved to be nearer her family. He spent the last years of his life beside the Red Rocks of Nevada, enjoying the ever-present sunshine and the company of his wife and family. He is survived by his wife Deborah, his daughter Karen Maddi and son-in-law Robert Perks, his son Christopher Maddi and daughter-in-law Toni Maddi, step-grandchildren David Perks, Nora Piorkowski, and Maxim Lott.

A virtual celebration of Salvatore Maddi’s life will be held early in 2021. Details are forthcoming and will be available here on Salvatore’s Obituary page.