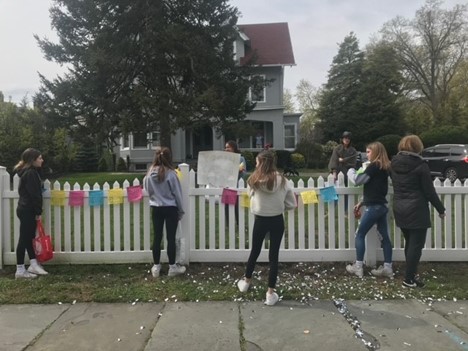 This is a picture of my daughter’s 14th birthday party.

It’s a far cry from the year before, when I hired a driver and van and with Drake blaring, took 15 girls singing at the top of their lungs, to an overpriced and underwhelming hibachi dinner.

In this picture, we are 2 months into lockdown, and any semblance of gathering had already seemed like a thing of the past.

I surprised her with 5 friends waiting on the other side of the fence in our front yard, confetti littered across the lawn, balloons at each post, to designate 6 feet, and I left homemade masks dangling from each one as a party favor.

I blindfolded my daughter, took her by the hand and when we got outside, I had to pause, overcome with emotion and in awe of what she was about to encounter.

The beaming teenage smiles of her besties, in tandem with their teary eyed moms, holding handmade posters and this year, singing Happy Birthday instead.

You know that feeling. That feeling when someone really shows up for you?

It’s a visceral combination of surprise, delight, and gratitude. You can’t see it or touch it or measure it.  But it’s there because you feel it.

It’s a sense of meaning.

Meaning, when defined subjectively, is situational, derived from our circumstances, experiences and emotional states.  As meaning-seeking and meaning-making creatures, we apply meaning to everything in our lives –  it’s how we interpret our world.

All throughout the pandemic, this kind of meaning was made manifest.  We realized how closely our fates are linked and watched as the duality of our human nature played out right in front of us,  in real time.

Forced to move away from what we own and what we do, to who we are and how we show up, we became reacquainted with our higher value as humans, and the ideals that give our life meaning.

The pandemic may have disrupted our lives, but it reconfigured our values.

I make a big deal about birthdays because my mom always did for me.  Until the year I turned ten, and all I got was a Holly Hobbie card signed, “Love, Mom.”

I remember thinking how odd it was because she had me hardwired into believing that cards should be “made from the heart, not bought in a store”.

What I realize now is that it was probably the least generic one she could find in the hospital gift shop that November morning of my birthday,  on her way to being admitted for her recently diagnosed colon cancer.

She died a little over a month later, on Christmas Eve.

I got a crash course in something most people don’t learn until much later on in life, a defining moment that split my life into two.  I developed a wisdom and perspective that inspired me to embrace all that life has to offer, to be in the moment because nothing is certain.  I appreciated relationships more and developed greater empathy for others.  My values had been reconfigured.

Covid was a collective crash course and a defining moment for our culture that split our lives in two.  Forced to reconcile our past with our plight, while facing an uncertain future, we found a deeper sense of gratitude and appreciation for life, gained insight and wisdom from all of the loss, and the empathy for others was at times, palpable.

Paul Tillich, a German-American Philosopher, said that  “Suffering introduces you to yourself and reminds you that you are not the person you thought you were”.

At the age of 10, I was introduced to a motherless girl, who went from taking things for granted, to understanding the fragility of life.

As we emerge from our collective pain and suffering , who will we be introduced to?

I began to consider this question as I started my thesis journey for my masters in business for social impact and sustainability, while in lockdown.

I was inspired by the sense of meaning that was emerging out of our collective trauma, so I chose to research it for my thesis topic.  I wanted to show that meaning is not an abstract concept, but rather, a relative, symbolic value that’s captured in things we don’t always see or have a name for: a feeling, an aesthetic, showing up.

I believed that if we could explore ways to create capital around meaning, and assign a value to it, that we could address real human needs.  Covid showed us the importance of serving people and it forced us to consider stakeholders that we had been neglecting, like the environment and our essential workers.  Our economy would always be market driven, but it became clear that it needed to be culturally & community driven as well.

So I proposed a framework for an Economy of Meaning, loosely based on Joseph Pine’s Progression of Economic value, to show that as a culture, we were moving away from trading in the tangible, extrinsic market value, to an intangible, intrinsic and more relational value.  We needed a less transactional and more generative system.  One centered around a return on impact, not just investment.   To think of money as a means, not just an end.

Unfortunately, my topic was rejected by the IRB board for being too abstract.  I was told I needed to ground it in something more tangible to give it context.  I was even asked, what exactly do you mean by meaning?

As a futurist, I imagine what could be possible, and then figure out how to get there.  It’s less about getting it right, and more about asking the right questions. And I see uncertainty as opportunity.

But I was new to academic research.  I didn’t know that you essentially take an existing theory and either support or reject it.  And then that evidence had to be peer reviewed to be considered valid.  There didn’t seem to be any room for the possibility or divergent thought that I was used to in my work.

I felt that the revolution of values in covid was proof enough to ground my hypothesis.  All the rules had changed so we needed a new approach.  In my mind,  there was no time for peer reviewed research and longitudinal studies.  This was our opportunity to influence how the future would unfold.

But what I discovered in my research though, is we humans?  We are biased toward meaning.  It is what defines our sense of value.

WHAT IF MEANING WAS OUR CULTURAL CURRENCY?

A cultural currency of meaning fosters collaboration not just consumption, value that is relational, not just based on a set price or a metric, and growth that is community driven & based on how much it helps others,  not just market driven.

We had already been trading in the cultural currency of meaning throughout covid with our everyday actions:  the way my daughter’s friends showed up for her even without the fun party, the rallies and marches to fight racism and social injustice,  and the wide open schedules that finally enabled us to fully participate in life.

THIS, is who we were introduced to.  But will we continue to show up?

Nobel Peace Prize winner Professor Muhammad Yunus, founder of the Grameen Bank, and pioneer of the concept of microcredit and microfinance said:

“Our economics, all those rules, procedures and so on, it is a system that we designed.  It’s not God who designed it for us. It’s not like we can’t change it.  It’s not a holy book.

We can design that system.  We need to challenge the holiness of it.  The whole world is falling apart, so we need to start designing.  We need to try these designs out in real life.”

Our individual sense of meaning in life may be shaped by our families of origin, our culture and the systems in which we live.  But what is meaningful to us as individuals, has the power to shape those very systems as well, when we trade in the cultural currency of meaning.

Covid disrupted our lives.
It reconfigured our values.
And it reminded us that we are not the person we thought we were.

So who have YOU been introduced to?