Not to be morbid, but human history is a bit of a nightmare. And it is hard on the psyche for humans to be aware that no matter what meaning they seek or what they do in life, they will die and many of their loved ones will, too.

Death may not be the most frightening but the dying process can be pretty brutal to witness or to experience directly. Existentialist Ernest Becker seems to have been proven right (Solomon, Greenberg, & Pyszczynski, 2015) when he argued that the major motivation of human activity and cultural evolution is based on death awareness and the need to buffer it and/or completely deny it. The latter strategy turns out to be quite pathological for humanity. Of course, in the end, the psychic and cultural symbolic defences are only partially capable to soften the blow of death-suffering-reality for finite creatures with advanced brains.

Finding ways to be positive (or even happy) in the midst of the negatives of life/death is a preoccupation for most of us. The coming of the second wave of Martin Seligman’s original wave of positive psychology is a welcoming of the role of existential philosophy via Paul T. Wong’s existential positive psychology (EPP) movement into the field of human meaning, caring, and growth potential. This Wongian emphasis is many things but outstanding to my view as a critical educator and curriculum designer, is the positive valuation of suffering.

Wong et al. present EPP as a science of human potential that claims, like many existentialist philosophers prior, that what makes a whole, agentic, creative, satisfied, resilient, and mature human being is a set of experiences of suffering that one has to engage and hopefully transcend. Their survival and thriving depends on this meta-skill; or simply call it, a life-skill. In parallel, the fields of risk studies and learning theories argues that animals and humans need to have risk and challenge in their life in order to become something greater, more viable, than what they would be without sufficient risk. Adaptive intelligence in systems comes from such experiences, be they accidental or planned, in the trajectory of growth and development.

My point in this short essay is not to document or evaluate all of those movements that support a Wongian and/or existential perspective; rather, I wish to draw forth a few implications of the EPP perspective for the field of education–and learning in general—in terms of understanding what it takes to raise wise and compassionate human beings.

The ‘best’ aims of education have always been up for debate. They are contextual to the times in which they are articulated. Historically, it is difficult to find consistency and common ground between all the various competing interest groups and their ‘shoulds’ for children being educated and socialized. As an educator and fearologist, I have taken on the specific research quest of how various philosophies of fear impact learning and education as a field.

In particular this essay, as part of the theme of this issue of INPM on life-education, intrigues me to ask: Can we design a holistic-integral life-education for the postmodern world that would be really helpful to humans to handle all the cascading crises from the natural to cultural world spheres? We live in the Anthropocene era. The future is looking rather bleak as to basic survival of our species and many others. Whether they show it overtly or not, humans are pretty terrified right now. EPP offers a foundation for life-education in our terrifying times and it draws on a general philosophy of suffering to guide it. Of many philosophers, perhaps none other than Miguel de Unamuno captured the essence of the Wongian perspective: “Suffering is the substance of life and the root of personality, for it is only suffering that makes us persons” (cited in Sabater, 2021).

I see this conscious acceptance of suffering in this existential perspective as a way to undermine the negative-fear that builds up a rigid defense system against suffering. EPP is attempting to dissolve that and make a philosophy and psychology based on suffering-positive ideas and practices rather than suffering-negative. Wong et al. have empirical evidence to show this is a good direction to go for human potential.

In parallel, there is a fearing-positive movement that I have documented and critiqued with a similar goal to supposedly undermine fearing-negative dispositions that tend by far to dominate how people think—and, how learning systems and education in general operate today. For example, there’s been a strong fear-negative populist (Western postmodern and ‘liberal’) movement since the early 1990s, with the aim overall to promote life-style as “No Fear!” Related as part of life-education, there are schooling movements, populist, professional and academic dedicated to creating “safe and secure” learning—that is, is “fear-free zones”; and, “fearless” environments, teachers and children (e.g., see Figure 1). The philosophy of fear behind these movements is characteristically implicit, half-baked, and lacking in good critical thinking.

The fear-negativists do not dialogue with fear-positivists generally and vice versa. I think they are gravely inadequate philosophically to actually attain their end goals. Such liberal progressive discourses of fearing-negative attitude would surely find Wong’s (2022) principle (#6) of flourishing—”Fear (God) and obey boundaries” offensive, if not a conservative setback for humanity’s evolution. 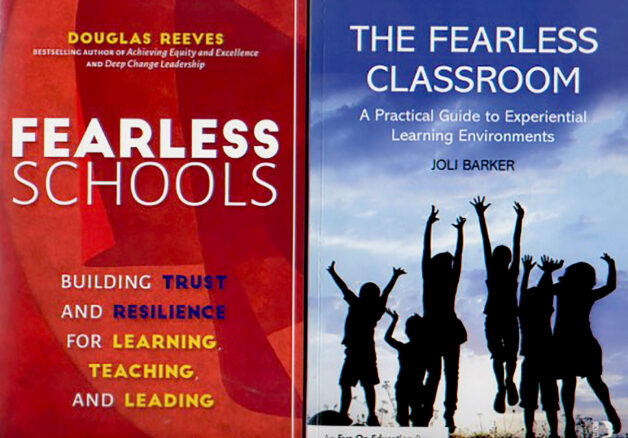 EPP says suffering-positive. And many new life-philosophies want to be fearing-positive (e.g., Gillian, 2002, 2005). If that is worthy to pursue, we ought to at least bring these two agendas together—giving each of them equal holistic valuation. How can one not be fearful (or terrified) when suffering and vice versa? Life is suffering; life is terrifying. I have not seen this equal representation of philosophies of suffering and fear brought into a systematic dialogue with each other in the literatures or in the Wongian philosophical perspective or by the fear-positive writers and teachers. I recommend existentialists of all kinds (including EPP) take a close look at their own fear education ‘norms’ and upgrade with new inter- and trans-disciplinary Fear Studies (e.g., Fisher, in press, 2006, 2019). I think there is a good deal of fruitful ground there to inform future life-education agendas.

Fisher, R. M. (in press). The Fear problematique: The role of philosophy of education speaking truths to powers in a culture of fear. Information Age Publishing.

Gillian, S. (2002). The beauty of fear: How to positively enjoy being afraid. Phemore Press.

Wong, P. T. P. (2022, March). How can we survive and thrive in wartime? International Network on Personal Meaning Newsletter. https://www.meaning.ca/article/how-can-we-survive-and-thrive-in-wartime/