Home » Articles » President's Column » Let Your Vulnerability be Your Strength

Are you worried about being vulnerable? “Vulnerability” is derived from the Latin word vulnerare (to be wounded); it describes the potential to be injured physically and/or psychologically. Generally, people consider vulnerability as weakness and the opposite of resilience.

Deep down, we are all inherently vulnerable to being injured physically and psychologically. Our core psychological vulnerability is our ancient emotions of shame, guilt, and fear. In addition, we also face the fear of making the wrong decision, trusting the wrong person, choosing the wrong career, or being inadequate for the task, resulting in failure.

There is nothing philosophical or abstract about such existential anxieties—it is just a part of being a finite human being in a huge world with so many unknowns, risks, and dangers.

Paradoxically, it is this deep-seated sense of inadequacy that drives us to reach out to others, to God, and to the path of developing our potentials to pursue something worthwhile, resulting in faith, relationships, and meaning, the three pillars of positive mental health.

This alternative view has been proposed by Brené Brown (2007). She sees vulnerability as a double-edged sword. One the one hand, vulnerability puts us at risk for physical and/or mental harms; on the other hand, vulnerability could be the gateway to resilience, creativity, and personal transformation. The challenging question is: How can we make vulnerability work for us rather than against us?

In the broadest sense, the concept of social vulnerability encompasses natural hazards and disasters (e.g., hurricane, flooding, earthquake) and the social context of risks, such as poverty, a widening income gap, random violence, terrorism, and a toxic corporate culture. For example, the Institute for Work and Health (IWH) has developed an instrument that measures the areas that a worker may be vulnerable to occupational health and safety (OHS) risks at work, from hazardous exposure to inadequate workplace policies and procedures.

In a digital society, computer security is a major concern, and we worry about the vulnerability in our hardware or software, which can be exploited by attackers or hackers. Technological progress at an exponential rate also leaves many people, especially the older generation, feeling vulnerable and left behind.

Feeling very sensitive to negative evaluation and feeling fearful of being rejected or exploited can make us very vulnerable to stress in the social world. Poor self-concept and dysfunctional beliefs can also make us psychologically vulnerable.

Robert Stolorow (2007) has proposed that emotional trauma lies in the shattering of what he calls the “absolutisms of everyday life”—the illusionary beliefs that we live in a stable, predictable, and safe world, without awareness of our existential vulnerability to injury, illness, death, loss, and suffering that define the human condition.

The Power of Vulnerability

Against this backdrop, Brené Brown (2012) challenges the cultural myth that vulnerability means weakness and invites us to restore relationship, purpose, and meaning to our lives. “In our culture,” teaches Dr. Brené Brown, “we associate vulnerability with emotions we want to avoid such as fear, shame, and uncertainty. Yet we too often lose sight of the fact that vulnerability is also the birthplace of joy, belonging, creativity, authenticity, and love.” 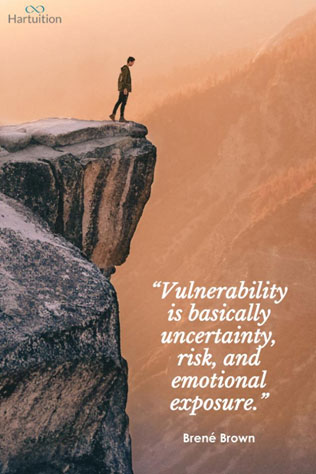 From Vulnerability to Strength

Recently, there has been increasing empirical research on the positive psychology of shame (Mayer & Vanderheiden, 2019; Wong, 2017). Thus, there is grounds for optimism that future research will identify a wide range of factors that can turn both social and psychological vulnerability to resilience and wellbeing—the theme for the 2020 Meaning Conference in Toronto.

In the final analysis, whether vulnerability will hinder or help us depends on how we cope with the painful feeling of being vulnerable. According to my vulnerability-resilience model, which is an extension of Brown’s shame-vulnerability theory, the difference lies in a number of choices we make at critical junctures on life’s journey:

I will demonstrate how to work through these steps, at the INPM’s 2019 Summer Institute (for more information, please see the announcement in this issue).

I also invite researchers and graduate students to work with me to empirically test this vulnerability-resilience model as one of the cornerstones of existential positive psychology or second wave positive psychology (PP 2.0). Interested individuals, please contact me at drpaulwong@gmail.com.